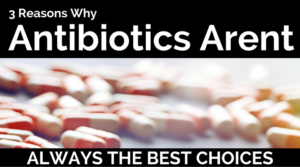 Antibiotics, aka “anti-bacterials,” serve as medications designed to slow down or stop the growth of bacteria. They frequently enable users to treat common infections caused by bacteria, such as:

Furthermore, a series of antibiotics remains one of the most popular medicines today – penicillin.

Clearly, antibiotics provide significant value for those who need added support against an infection resulting from bacteria. The U.S. Centers for Disease Control and Prevention (CDC), however, notes antibiotics can be problematic at times for several reasons, including:

“Antibiotics are among the most commonly prescribed drugs used in human medicine,” CDC notes. “However, up to 50 percent of all the antibiotics prescribed for people are not needed or are not optimally effective as prescribed.”

Overuse of antibiotics also puts the lives of users at risk.

CDC reports at least 2 million people in the United States annually become infected with bacteria that are resistant to antibiotics, and roughly 23,000 people die as a direct result of these infections. Also, many people die from other ailments that were complicated by an antibiotic-resistant infection, CDC points out.

2. Lack of Support with Viral Infections

Taking antibiotics to combat a cold, flu, or sore throat caused by a virus will not cure an infection or prevent other people from getting sick, according to CDC. Instead, CDC recommends using a combination of fluids, rest, and over-the-counter (OTC) symptom-relief products to win the battle against a viral infection.

CDC adds the use of antibiotics for viral infections may contribute to unnecessary and harmful side effects, along with antibiotic resistance in which bacteria “are able to resist the effects of an antibiotic and continue to cause harm.”

Thus, when it comes to fighting many viral infections, CDC suggests you might be best served without antibiotics.

3. Use of Antibiotics Prescribed for Someone Else

Just because an antibiotic helped someone else recover from an illness does not mean it will perform the same way for you. CDC notes taking someone else’s antibiotics prescription may cause severe harm as it can delay proper treatment and enable bacteria to grow.

With antibiotics or any other medicine, it usually is better to err on the side of caution. Therefore, if you are offered someone else’s antibiotics prescription, it may be best to decline the medicine until you meet with your doctor and review all of your treatment options.

If you’re sick, and antibiotics are not called for, consider an all-natural supplement or food which has no side effects and won’t cause antibiotic resistance. For example, Colostrum LD® supports your body’s immune response in a variety of ways and can be consumed in any quantity. Furthermore, colostrum generally shouldn’t interfere with other prescription medications you might be taking.

Sovereign Laboratories offers colostrum supplements that are non-allergenic and contain bioactives that may offer immune-boosting benefits. Colostrum’s most effective bioactives include immunoglobulins, antibodies, lactoferrin, lysozyme, lactoperoxidase, and colostrum polypeptides ( aka proline-rich polypeptides, or PRPs) To learn more about our colostrum products, please visit our website today.

Why Everyone Should Take Colostrum

Colostrum and the Aging Immune System

Are You Fit to Survive These Trying Times? with Kat James and Antoinette Caruso

Flu Season Is Here: What You Need to Know

Questions relating to your specific medical or health condition as they pertain to colostrum should be directed to your physician. If your physician is not familiar with colostrum in general, or Colostrum LD™ specifically, ask him/her contact us. We’d be happy to assist them with information about the importance of including colostrum in your daily diet; published clinical data supporting the use of bovine colostrum supplements; and protocols for including Colostrum LD™ in complimentary medicine. Physician consultations are welcome.

Information on this site is provided for informational purposes only. It is not meant to substitute for medical advice provided by your physician or other medical professional. You should not use the information contained herein for diagnosing or treating a health problem or disease, or prescribing any medication. You should read carefully all product packaging and labels. If you have or suspect that you have a medical problem, promptly contact your physician or health care provider. Information and statements regarding dietary supplements have not been evaluated by the Food and Drug Administration and are not intended to diagnose, treat, cure, or prevent any disease.