Colostrum and the Gut-Brain Axis

Your body is home to trillions of microbes. Most are harmless, but many play active roles in your health. A large portion of helpful bacteria can be found in your stomach and intestines, ensuring healthy digestion and metabolism so that you can get as much nutrition from your food as possible. However, growing research suggests that there may be an important connection between the microbes in your gastrointestinal (GI) tract and your brain, called the microbiome gut-brain axis. Let’s take a closer look at the gut-brain axis and the role colostrum may play in its function.

What is the Gut-Brain Axis?

Scientists have understood that the gut and the brain have some sort of relationship. The gut-brain axis refers to a bidirectional link between the enteric nervous system (ENS) and central nervous system (CNS). The CNS is comprised of the brain and the spinal cord. The ENS encompasses a web of over 500 million neutrons spread over your entire digestive tract. In fact, the complexities of the ENS have led to many calling it the “second brain.” The ENS is relatively self-sufficient and capable of controlling essentially all functions of the digestive tract on its own. The ENS and CNS do still connect via the vagus nerve, which is the 10th cranial nerve.

While researchers previously understood that there was crosstalk between the enteric and central nervous systems, they ignored the potential influence of the body’s microbes because of the blood-brain barrier. This barrier essentially keeps bacteria, viruses, and germs out of your brain, but some research suggests that the microbes in your gut do actually affect your brain, and vice versa. 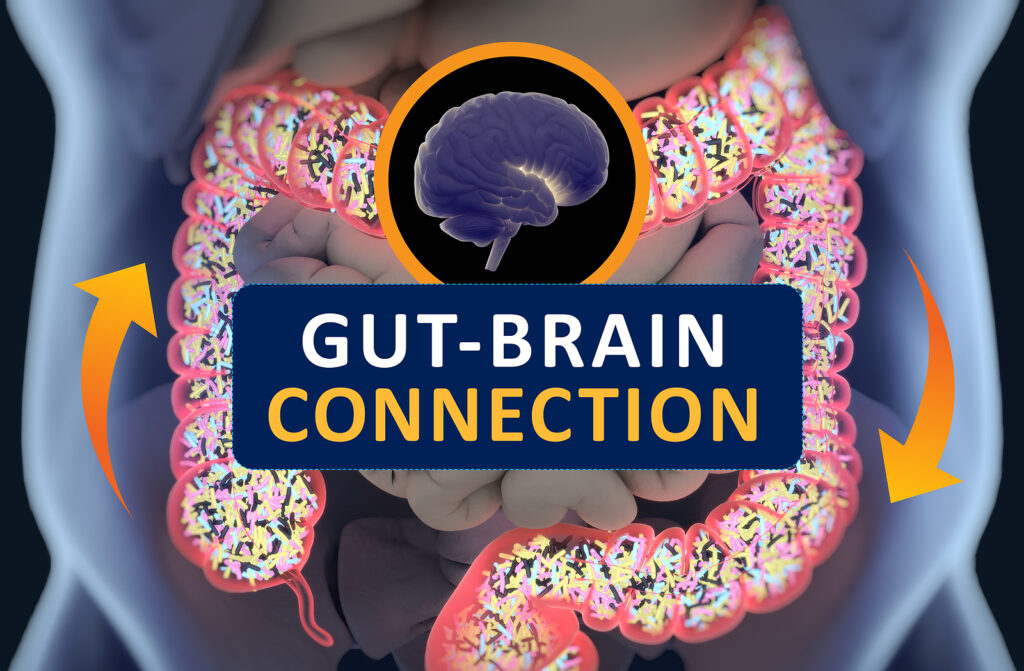 Effects of Microbiota on the Brain

Microbiota refers to the population of microbes in a specific ecosystem, in this case, the microbiota of your gut. The exact mechanisms of action are still being researched, but studies show that the gut microbiota interact with the gut-brain axis via the vagus nerve, endocrine system, immune system, and metabolic system.

Although the mechanisms still require more study, the effects are a little easier to see. Early studies from the 1970s found that stress affected the microbes living in the guts of germ-free mice. One study found that germ-free mice exposed to stressors had more coliform bacteria and less lactobacilli bacteria. Lactobacilli are the helpful bacteria known to benefit digestive health.

Dysbiosis, a microbial disturbance or imbalance, in the gut can result in a variety of GI disorders, including ulcerative colitis and inflammatory bowel disease. One study found a strong correlation between disorders caused by dysbiosis and the presence of certain mood disorders. Interestingly, studies also show that the CNS’s response to stressors can affect your gut and lead to GI concerns. If you’ve ever been extremely stressed, you probably know the digestive troubles that tend to follow suit.

There are also numerous studies showing that your gut microbes create a wide range of compounds and neurotransmitters that affect your brain despite the blood-brain barrier. For example, serotonin is a neurotransmitter that plays a key role in regulating your mood, particularly feelings of happiness and general wellbeing. Low levels of serotonin have been linked to mood issues, and many solutions used in the treatment of mood usually involve modulating serotonin production. However, a vast majority of serotonin in your body is not made in your brain. Up to 80% of serotonin is produced in your gut, and the types and number of microbes in your gut can have an effect on the amount of serotonin you produce.

Colostrum is a milk-like fluid that is produced and secreted by mammals in the first few days after giving birth, prior to the appearance of true milk. Colostrum is packed with protein, carbohydrates, and fat, as well as an expansive mix of vitamins, minerals, and antibodies.

Colostrum and the Gut

There are various factors that can affect the microbes in your gut just in your environment alone, but your diet may play the most immediate role. Colostrum has been shown to support several functions within the gut. Thanks to coffee, alcohol, processed foods, and a variety of environmental factors, people sometimes have intestinal hyperpermeability, commonly known as leaky gut. This is a condition in which negative microbes, toxins, and undigested food proteins enter the body through an exceedingly permeable gut lining. Stress has been shown to alter intestinal permeability. Leaky gut may also prevent proper nutrient absorption, and over time, leaky gut may lead to other digestive concerns.

Colostrum’s bioactives help improve the microbiome for an more positive influence of your gut-brain axis. There is still plenty of research and study to be done to truly understand how microbiomes specifically affect the gut-brain axis and how you might be able to manipulate your gut microbes to positive affect. However, helping your gut bacteria through the use of bovine colostrum, probiotics, or other supplements may support your GI health, and whether you’re having the occasional mood issue or noticing some GI distress, not having to worry about stomach issues can go a long way to improving your health.

This article was brought to you by Sovereign Laboratories, a world leader in the development of liposomal delivery to maximize the bioavailability of our dietary supplements.
Colostrum and the Gut-Brain Axis was last modified: July 6th, 2021 by Sovereign Laboratories
The Harmful Effects of GlyphosateDetoxing with Colostrum-LD®: Here’s What You Need to Know

4 Signs You May Have Leaky Gut Syndrome

The Importance of Gut Health

4 Different Ways to Use Colostrum

How to Stay Regular While Using Bovine Colostrum

Lactoferrin and Its Effect on Acne

4 Signs You May Have Leaky Gut Syndrome

The Importance of Gut Health

4 Different Ways to Use Colostrum

Information on this site is provided for general informational purposes only. It is not meant to substitute for medical advice provided by your physician or other medical professional. You should not use the information contained herein for diagnosing or treating a health problem or disease, or prescribing any medication. You should read carefully all product packaging and labels. If you have or suspect that you have a medical problem, promptly contact your physician or health care provider.